Let’s get some boring admin out of the way here first – I’m not including Missy Elliott in the artist bit here, as I did with ‘ET’ and Kanye, because Missy was added after the song was initially released. Whereas Kanye was there from the start of ‘ET’’s chart reign. Got it? Good. Now let’s dance.

Although actually, the artwork for the remix ‘package’ is amazing isn’t it: 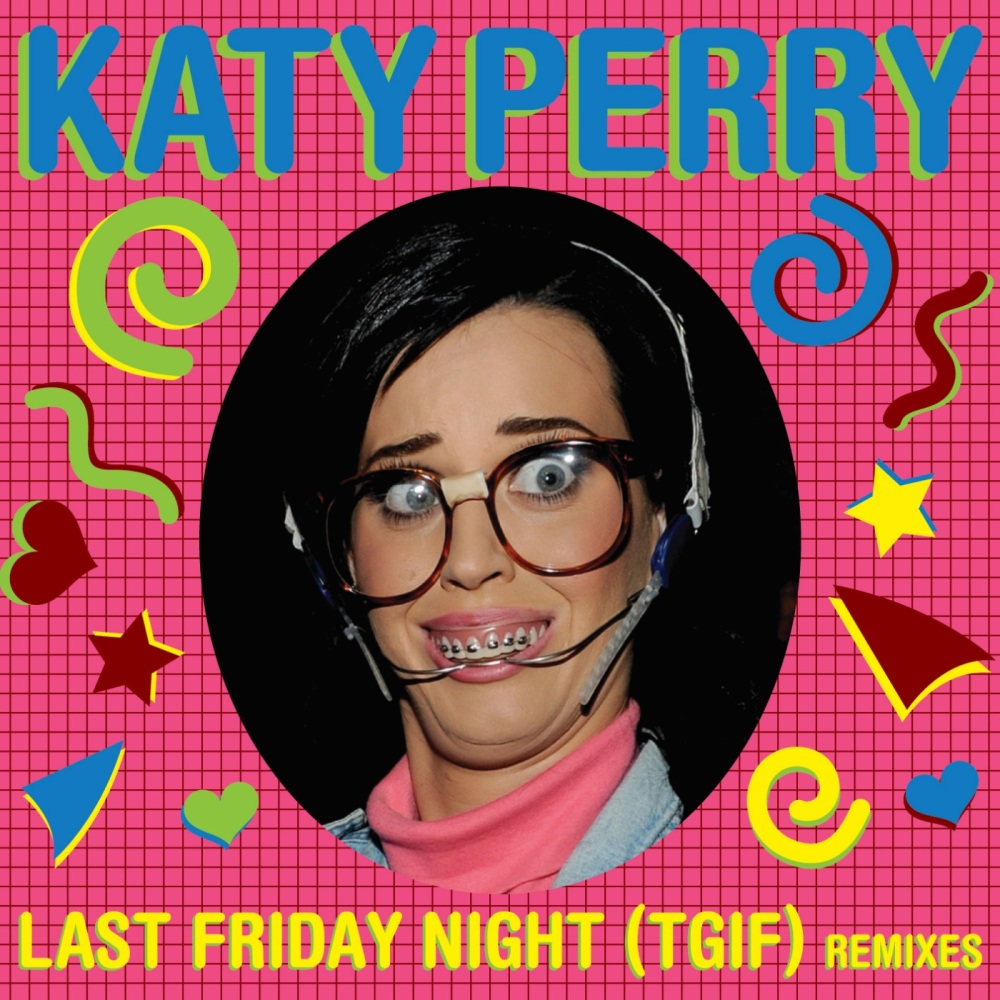 Now then, I really like ’Last Friday Night (T.G.I.F.)’ but goodness me if you find (or found) Perry’s faux naive Betty Boo-style persona cloying then this song must be like swallowing cotton wool. Or something. It’s so sugary it will give you diabetes after just one go round of that immaculate, multi-layered and seemingly never-ending chorus. Also, if that bubblegum guitar riff and big elastic baseline doesn’t get you then the lyrics are full of little sugary delights/downers such as “I’m pretty sure it ruled” (sung in a full ‘oh my gosh, whaaaat?’ teenager twang) and – wait for it – “that was such an epic fail”. It’s so on the nose it almost wills you to hate it and yet there’s something so endearing about it all that I just want to give in to it completely.

As with a lot of the songs from ‘Teenage Dream’, ‘Last Friday Night’ is based on real life events but refracted through a candy-coated prism (not a reference) that makes it sound like the soundtrack to some teen movie roller-skate rink. The story goes that Perry and her mates (one of whom was Bonnie McKee) were out in Santa Barbara having a lovely time when they got wasted, lost all their clothes and generally did things they regretted in the morning. “We went out to this place called Wildcat and got crazy,” Perry said. “We had a couple of beers and danced until we died, then brought the party back to the hotel room. Most of that song is actual truth, apart from the ménage à trois…unfortunately! But, yes, streaking in the park, that’s what we did, so we had to write a song about it the next day!” McKee stated that the song is basically an aural documentary of her and Perry’s average evening during their more hedonistic days. “TGIF is pretty much a word for word description of our trip to Santa Barbara, so I love that one. It’s really catchy and fun and makes me nostalgic.”

A lot of other people thought it was pretty catchy too actually. It became the fifth (FIFTH!) US Number 1 single from ‘Teenage Dream’, making Perry the first female to ‘score’ that many chart-toppers from one album. It also tied Michael Jackson’s record of five Number 1 singles from ‘Bad’. As mentioned above, ‘Last Friday Night’ was given a bit of a helping hand to the top spot by a remix version that features Missy Elliott infusing the song with even more sugar-induced energy. Although actually the remix does away with the ludicrous sax solo and replaces it with a sort of digitised version. No thanks. The song’s excellent, cameo-filled Marc Klarsfeld-Directed video didn’t hurt either, with Perry’s imperial phase meaning what could have been a mess was actually a glorious celebration of kitsch.